It can play havoc with my physical injuries but there's no denying that training in a good 'Dojo' that operates within the structure of a national organisation helps me to cope with Post Traumatic Stress Disorder.  I train with Sensei Rob Manning at the South Notts Shotokan Karate Club which operates under the umbrella of the Karate Union of Great Britain (KUGB). 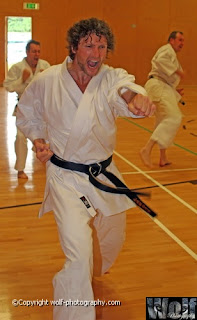 One of the problems with PTSD  is that the body sometimes reacts before the mind has had time to analyse the situation.  To give you an example, a friend was once play fighting with me and without my consent.  I said that I didn't want to but he didn't listen. After the second strike to my body I stopped him in his tracks with a throat strike.  I didn't want to do it, I hadn't planned to do it ... my body reacted independently with a light throat strike that stopped him in his tracks.  I'm sure there are experts out there that will argue that your body can't act without thought.  I have a question for them - do you consciously instruct your sphincter to open when you're having a dump or is it a function that the body just does?  It's the same with self defence - the moves become embedded deep within you.

Every now and then I meet a civillian that doesn't know anything about me and chooses to taunt me or to threaten me.  My biggest fear is hurting someone through an automatic reaction.  As veterans we're used to reacting without thought.  I guess that was part of the conditioning at basic training.

I've been training with the KUGB since 1991.  I took a long break owing to a serious road accident.  The injuries are still with me and cause problems when I train but it's worth the pain because of the way that it helps me have a 'safety catch' over the PTSD 'triggers' that I live with.  The main reason for this is the spiritual side of Karate and the associated culture:


Character
Exert oneself in the perfection of character

Sincerity
Be faithful and sincere

Effort
Cultivate the spirit of perseverance

Etiquette
Be respectful and courteous

You may find difficulties with regards to short term memory problems or perhaps your body will lock because your reflex action is to do one thing while your mind wants you to do something else ... but it's worth perservering.

If you live with PTSD, irrespective of whether or not you're a veteran,  give Karate a go ... it can help you in a number of ways.  It helps me.

Update
A lot has changed since this piece was written.  I achieved Shodan, gained my instructor qualification and opened up a dojo in North Nottingham.  Please see www.meiyo.co.uk.  If you live with PTSD or have had a bad experience that you survived or affected you in some other way ... please feel free to come in to the dojo and have a chat.

I still train at least twice a week and I learn from different senseis in the region or further afield.  The learning never stops!
Posted by Villayat at 22:46