Scotland was beautiful, thought provoking and captivating.  A lot of the  weather was what you'd expect in that area as mountainous areas seem to have a few weather systems active all at once.

The days were cold and the nights colder.  I was in a lot of pain by day two and having to use the TENS machine a lot.  I'd be lost without it ... that and a hot bath.  Liz and Neil had one running for me when I needed it.  They looked after me  :o) (thanks Guys).

I saw a different osprey and started to get acquainted with it as I watched it hunt the small lochs in Mossat.  I watched him circle the three ponds and positioned myself amongst the bushes in an area that allowed me to view him hovering over the three locations. 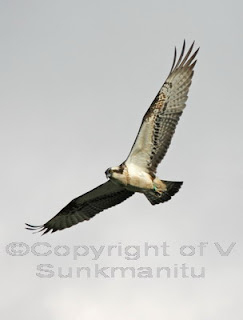 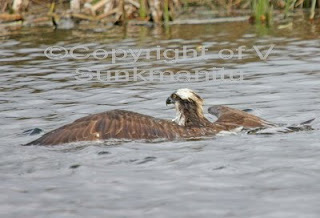 All of a sudden he hovered for about 2 seconds, folded his wings and dived!  Strike!!  He seemed to like sitting there in the water as his talons pierced his prey, which in this case was a trout.

That gave me a couple of seconds to move quickly so that I could photograph him taking off with his meal but I couldn't get the angle I wanted. 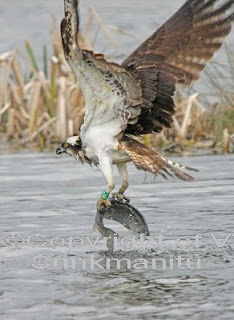 If you want to see the osprey at a place that isn't overcrowded, head to Mossat Fishery, Little Bridgend Farm, Mossat, Alford, Aberdeenshire AB33 8PL.  Tel 01464 861 000.