Mental Vs Physical ... the constant internal battle in the Dojo ...

I remember becoming aware of a fact with regards to disability a few years ago:

I was working in the CAB Service as a Tribunal Representative and my caseload was diverse; I was working on physical and mental health related cases and something became apparent:

If you have a mental health problem, there's a good chance that you will develop some kind of physical health problem if the condition keeps you isolated and stops you being as active as you used to be.

If you have a physical health problem and are restricted from your normal level of mobility or are afflicted with chronic pain, there's a chance that you may develop some kind of mental health problem.

Those of you that work in related areas should be able to confirm the above if you listen to the people that live with these issues.

At the time I knew that something was wrong with me stress wise but I was still managing to work and ignore it because I was losing myself in my work and doing a lot of training at the Newquay Shotokan Karate Club.  I'd manage to forget those messages from the back of my mind that kept saying. 'You're like that' or 'You get like that when you think about serving in Northern Ireland' and focussed on doing the job.

I started getting ready for my Shodan grading in 1994, training with Sensei Ed Stark.  I'd moved to Bristol to support my soon to be born Son, when I was involved in a serious car accident.  I'd been hit by a stolen car that was speeding at 50MPH  - I was stationary over the other side of a hump backed bridge ... and I can still hear the collision and ... the glass tinkling to the ground and the groan of metal on metal.  My son was a baby at the time (now a 6ft 2 inch 16 year old midget) ... I remember thinking sometime later - 'Child seats are brilliant and they work!'  The medical team looking after me say I was lucky to survive as there were no head rests in the car - A Ford Escort Mk2.  They also said that my fitness through Karate had saved me.

The accident broke that last chain of defence against my internal battle against Stress because I couldn't train at the Dojo anymore owing to physical pain.  I tried ... I went back and it felt like every punch was tearing the tissue around the injury sites around my back, neck and shoulder.  I had to stop.  I tried to return to Shotokan Karate a couple of times again and kept trying to train periodically ... but I couldn't maintain anything consistent because of the physical injuries.  Ed was very supportive and realistic about the situation.  Five months after the road accident I started having more flashbacks and nightmares around my time in Northern Ireland ... this lead to a formal diagnosis of service related Post Traumatic Stress Disorder. 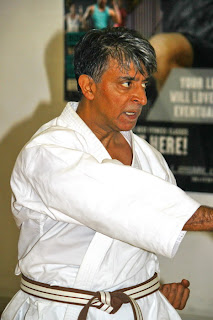 I started training regularly again  a couple of years ago.  It still hurts and affects my mobility for a couple of days after a training session.  Disability with Veterans can be a complicated issue.  For myself there's a constant tug-of-war as the body will keep going until it can't do anymore.  The last Karate event that I helped at caused a lack of mobility and raised pain levels that lasted for four days.  If you saw me walking down the street, you probably wouldn't suspect there was anything wrong with me, unless you have experience of observing certain mobility problems.  My pain specialist advised me to stop Karate but I need a mental victory over myself and over that road accident.

After moving back to the Midlands, I was lucky to find a teacher that understands these issues:  Sensei Dudley Wheatcroft at Satori Shotokan Karate Club. Dudley encourages me and knows when to push me.  He knows I give a 110% every session, as I've always done in any dojo.  Unfortunately some of the moves are getting harder and my body can't do them now ... luckily they're not a part of the grading syllabus. Certain combinations of moves and stance cause a lot of pain and the body feels 'wobbly' and I get spasms of fresh pain ... and yet it's beneficial in my fight against PTSD.  Another problem is the short term memory loss.  There have been a few changes in Kata and the body sometimes fights the mind because 'muscle memory' wants to take the body in a certain direction and the mind wants the body to do something different which sometimes leads to a 'lock out' and the body doesn't move.

I went for my grading for Shodan three months ago but made the mistake of driving up to Kendall from Nottingham which is a four hour drive.  It was also a busy grading and our section didn't start until 4:30pm.  By then my body had locked up with pain and a lot of moves were difficult.  I passed the Kihon (basics) and Kumite (sparring).  I have to retake the Kata element of the grading though.

I'll be trying again soon ... on the 23rd September 2012.  I just have to pass the Kata element.  If I pass the grading exam, I can start learning more on a different level.

In my opinion the mental and physical discipline of the dojo, combined with memory work entailed in learning new techniques, combinations and Kata can help you to cope with a mental health condition.  Why not log onto the Karate Union of Great Britain's website and find a dojo (training hall) near you.