If you saw my handy work downstairs from when I moved in, you'd understand.  The paint work hasn't been tidily 'cut in' as much as  ... (hold on, trying to find the right word...) caked on in places.  No straight lines exist in this parallell universe. well not with regards to decorating. 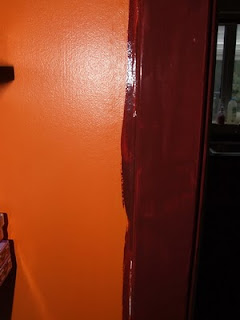 Actually, I did notice that the house builders didn't own protactors or set squares.  There aren't many correct right angles etc.  I wonder if I inherited their ability to balls things like that up?

Hmm ... no.  I can't blame them.  Besides, my kids'll bubble me.  They still take great delight in telling people about the cock up I made when I was laying down some network cable for their computers.  The hole that was supposed to have appeared in the cupboard under the stairs miraculously appeared in the kitchen ceiling.  I never bothered filling the hole up as I knew it made them laugh.

So, I've got this new bath.  It was supposed to be here on Tuesday but ended up arriving Wednesday ... at 6:30am.  I wanted a bigger bath to help me with my pain relief and found one that will allow me to have my legs straight in the bath ... and float!!  I tried it this morning and couldn't believe it.  I felt like a kid swimming for the first time.  I felt like shouting to someone - 'HEY!  Look at me - I'm FLOATING in my BATH!'  No one was here though, so I thought I'd share it with you instead.

I finished varnishing the panel I made for it.  I put some bits of cladding together and varnished it with some waterproof satin finish stuff.  I've just finished painting the walls.  Next job will be to tile the walls.  I did some tiling a loooong time ago.  It turned out ok and NONE of the tiles fell off.  So I'm going to have a go here too.  The more simple stuff I do now, the less I get charged by the pros. 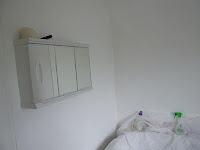 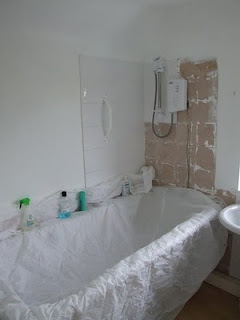 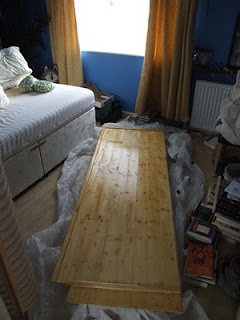 I have a feeling I'll be having different dreams tonight as the varnish dries on the panel!
Later
Wolf
Email Post