This species has been on my list of beautiful animals to photograph for about three years now.  I've tried to make contact with a few people that have photographed them over the years ... but, sadly, never received a response that was helpful.

I was in Italy again the week before last.  My friends had told me that they would be introducing me to a friend of a friend who was a bird photographer.  As I was using a budget airline with hand baggage only, I packed some light combats in case I got to go and do some photography with the guy.

I met the guy on the Wednesday, Loui, an Italian Air Force Veteran ... and what's the first thing he says?  'Did I want to see a European Bee Eater colony?'  My response, after picking my jaw off the deck, was 'Ohhh Yes!'

So started a new friendship and two difficult days of photography.  The temprature ranged between 38C to 40C by the second day.  I had a couple of shots that were usable on day one but nothing compared to what I may have gotten if I had my full kit with me.

Loui was busy with other projects and dropped me in the zone, coming back periodically with water so I could hydrate again and again ... and again!  My combats were drenched with sweat by the end of day one and I was at the limit of my body pain threshold by day two ... which wasn't good when added to only having about three hours of sleep in the time I was away on this trip.


It was worth it though!  Day one was mainly a recce to watch how these birds fly, communicate and hunt.  I was very surprised to see that they act more like a tactical squadron of an air force than any other bird species that I've observed to date.  After delivering the food to the nests, the birds would all fly off together to hunt more insects (bees, beetles, butterflies, dragonflies and damsel flies). 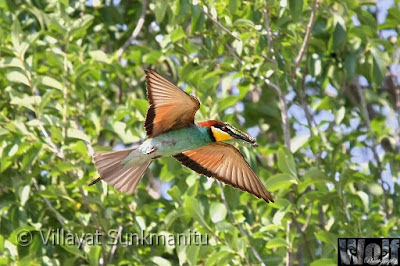 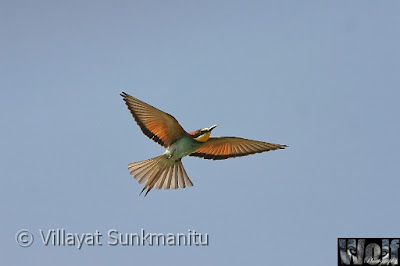 One bird would come back before the others and reconnoiture the nesting area, while constantly communicating with the other birds, then they'd all start coming back in and rest in the trees for a little while before delivering the food and heading off again. 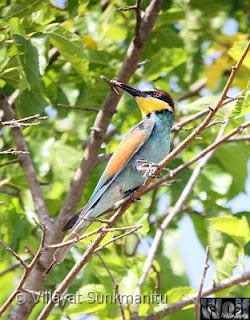 Some birds with bigger prey would sit for longer in the trees and I wondered if they were displaying their catch to other members of the colony with some sense of pride.

As the wind shifted, their flying skills were taxed, particularly around the different plant life that was scattered on approach path to their nesting holes. 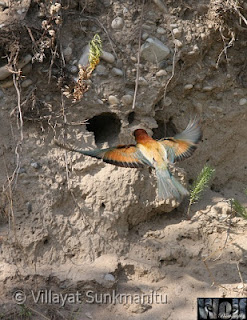 Exiting their nesting holes was a more straight forward task, following a quick peek to make sure no predators were around. 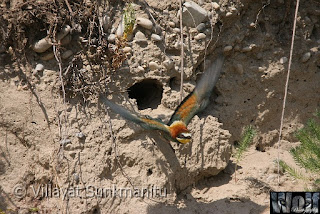 You can view the whole set of images here.


My sincere thanks to Loui for taking me to the colony!