There I was watching the sky change colour, recognising the snow clouds and thought I'd head out to the garden and load up the bird feeders as they'll be needing our help now.

I put nuts out for the squirrels and suet, a berry block and seed for the various birds that come in.  The robin was straight in there!  I then went in and had a cup of tea and a chat with my neighbour, Edna.  Edna's 87 now (oct).  We watched the snow come down and chatted about times when we'd seen real snowfall from her time of youth and mine.  We used to get 4 and 5 feet snowdrifts in the street in the Midlands.  We allowed eachother 1 snowball each for a brief but feisty fight and then went back and watched the neighbour's kids start a snowball fight outside.  That did it for me.  I was off!  I was in flip flops and socks engaging the two lads; catching their snowballs and chucking them back at them.  Their parents and another neighbour joined in and bedlam ensued!!  Great fun.

Then two children that have recently moved into the area turned up.  Jaydn and Olivia.  Jaydan wanted to build a snowman but wanted someone to build it with.  So we all got on with building a snowman together, after a brief snowball fight!

So there he stands, young Frosty, ready to make his magical, mystical flight over our houses while we sleep and 2 small plus 3 big kids got to have some fun with the snow. 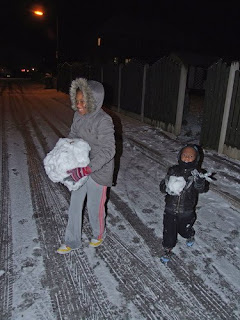 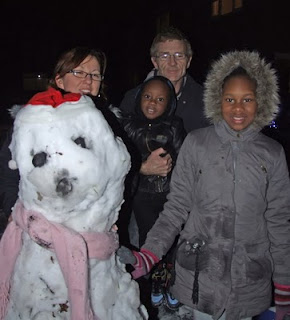 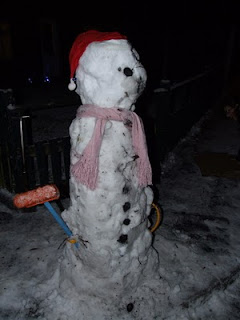 Get out there and have some fun!  Let the inner child play!!!